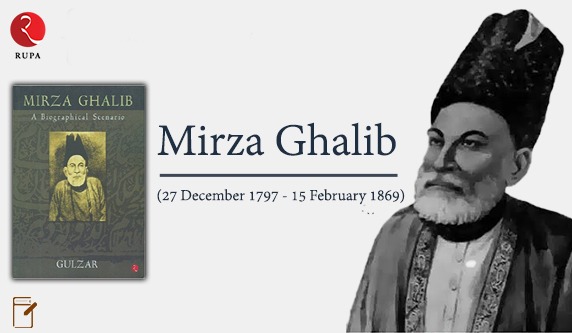 In this unique book which is a literal ‘poets on poets’ document, Gulzar sets the context for the very existence of the timeless Mirza Ghalib.

The story of India’s most celebrated Urdu poet Mirza Ghalib retold by Gulzar, one of the most famous Urdu poets of the modern era, this book outlines the life and times of Mirza Ghalib. A figure that remains the subject of much intrigue and romanticism even after years of pivoting influence on art and literature, Mirza Ghalib strangely remained out of context from his own era. This book recreates and reintroduces the idea of cultural moorings rooted in the roots of time. What was it like to be a contemporary of Ghalib? What was it like to be a poet during those times, and more importantly how to appreciate the poetry from the lenses both old and new.

The book details Mirza Ghalib’s outlook on love and his relationship with his doting and dedicated wife; His passionate longing for writing and sleight affair with words; His ever-broadening canvas of love for inane objects and places which often transcended the time and space.

How can a book on Mirza Ghalib be complete without the mention of his beloved, Dilli. The book makes it pretty clear that the city of Dilli was like a lover to Mirza Ghalib. He allowed it to break him and in the end, make him too.

Born in Agra on 27 December 1797, Mirza Ghalib’s first love was always Dilli (Delhi) about whom he writes, “I asked my soul: What is Dilli? She replied: The world is the body, and Dilli is its life.”

His was a pure love which city returned in kind and in abundance. In quiet moments, the city still reverberates with Mirza Ghalib’s words and love. There are still insane lovers of his life and words who roam across the length and breadth of the chaotic city of Delhi. It has been more than 150 years since the city lost its lover, but his presence is still felt in all those corners where love is pursued with pure intent.

To Love is to be Ghalib

In the words of Gulzar Sahab, “Ghalib is very important for everyone. You should know about him even if you are not familiar with his language. His poems, his lifestyle, his behaviour everything is a great inspiration. At a time when people used to carry their religion on their shoulders, Ghalib talked about humanity. The man lost seven children and carried a huge sadness inside him but despite that he was known for his sense of humour.”

Mirza Asadullah Khan Ghalib was merely seven years old when he made his first visit to Delhi. By the age of 13, he had moved to the Mughal capital, after his marriage to the niece of the first Nawab of Loharu and Firozpur Jhirka. He lived in the city for 50 years. In all those years, Ghalib never bought a house but lived on rent, moving whenever he got bored. But he never moved out of Gali Qasim Jan or its surroundings. His last home, where he died, was under the shadow of a mosque. This prompted the couplet: Masjid ke zere saaya ek ghar bana liya hai/ek banda-e-kameena hamsaya-e-khuda hai (Under the shadow of the mosque, I have made my house/a scoundrel is the neighbour of the God).

Here is an excerpt from the book:

Ghalib’s life, particularly his life in Delhi, is fairly well-documented. The two most useful sources in this regard are—one, the copious letters written by Ghalib to his patrons, friends, and disciples which have been compiled painstakingly by Ghulam Rasul Mehr in his Khutoot-i Ghalib, and, two, the chronicle of his life, Yadgaar-e Ghalib, recorded by one of his closest disciples, Altaf Husain Hali. These and other sources helped Gulzar to draw the portrait of the poet in a credible and realistic way. Ghalib’s life and the way he conducted himself, the rapier-sharp wit with which he outwitted his opponents and interlocutors had enough dramatic elements in them, but the skill in organizing the events of the poet’s life in an order that would make the maximum impact on the audience is entirely Gulzar’s and shows his artistry at its best. The biographical scenario starts with an episode pertaining to Ghalib’s last days, and then through flashback, the reader is taken to his early life when he stayed with his father-in-law’s family in Delhi, and then on, the narrative follows a fairly straightforward chronology. The streets and alleys of Shahjahanabad and Ballimaran come alive through the vivid images drawn by Gulzar. Ghalib’s weakness for good wine, his excessive love for mangoes, his lack of reverence in not observing the more demanding commandments of religion, his eventful journey to Calcutta in quest of his elusive pension, the unfortunate events leading to his three months in prison, the short-lived prosperity upon his becoming the poet-laureate, his intense loneliness following the years after 1857 – all these are historically verifiable facts of Ghalib’s life, and Gulzar has been successful in presenting them with panache and penetration.

Surely, one of the most heart-wrenching scenes in the whole book occurs when Ghalib returns from Calcutta expecting that his only surviving son must have grown up into a boy, but on entering his house gets to know that the son died a couple of days ago. As he stands by his son’s grave, the grieving father seems inconsolable. The ghazal that he wrote following this tragedy shows a unique amalgam of the depth of his love for his son, his subtle and oblique complaint to God (he was too proud to make a direct complaint, even to God), and compassion for his long-suffering wife. Gulzar has used some apt couplets from the ghazal to depict the pathos of the situation: La^im tha ke dekho mera rasta kayi din aur Tanha gaye kyon, ab rabo tanha kayi din aur (Wise it would have been to wait for me a few days more. Why did you leave alone? Now be a loner for a few days more.) J ate huay kahte ho qayamat ko milenge Kya Khoob! qayamat ka hai goya koi din aur (We will meet on Doomsday, you said at parting, Did you think it could be any other day than this one. Chitra Banerjee Divakaruni, a Vidushi of our times