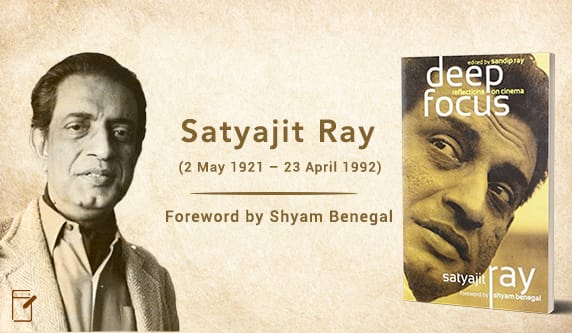 From Pather Panchali (1955) to Agantuk (1991), Satyajit Ray impacted the World Cinema a great deal. During his time, the Indian cinema rose to prominence never seen before or since.

Satyajit Ray wasn’t just a filmmaker. He was a man of many other great talents. From his bestselling novels and short stories to his timeless pieces of music, Satyajit Ray dabbled in most of the creative activities that were available in those times.

This book, Deep Focus brings together, for the first time in one volume, some of his most cerebral writings on film. With the economy and precision that marked his films, Ray writes on the art and craft of cinema, pens an ode to silent cinema, discusses the problems in adapting literary works to film, pays tributes to contemporaries like Godard and Uttam Kumar, and even gives us a peek into his experiences at film festivals, both as a jury member and as a contestant. Published in association with the Society for the Preservation of Satyajit Ray Films, and including fascinating photographs by and of the master, Deep Focus not only reveals Ray’s engagement with cinema but also provides an invaluable insight into the mind of a genius.

Another feature of Deep Focus is the foreword written by his cinematic protege, Shyam Benegal. Here we in this excerpt we produce the same for our readers:

I WAS PROBABLY a trifle more passionate about going to the movies than my siblings or my peers at school. Before long, cinema became an extension not only of the world I occupied (from which it was altogether different) but also extended my imagination to an extraordinary degree to the vast expanse of the many universes of geography, history, mythology and fantasy, otherwise locked up between the covers of books.

Making up my mind that all I wanted to do when I grew up was to make my own films gave me a licence to indulge my film- watching fancy much to the alarm of my parents. Discriminating films even from the point of view of enjoying some and not others developed over a period of time. This in turn was followed by seeking out films that one liked and working out the reasons for doing so. While still in school, I already had favourite directors alongside film stars. These films were marked out for repeat viewing. The films that were available for viewing at the time were mostly English-language films from Hollywood and Hindi films with a smattering of an odd Marathi film from Poona. The clear favourites among the directors were John Ford, William Wyler, John Huston and a director pair from Britain, Michael Powell and Emeric Pressburger. Hindi films by Mehboob, Sohrab Modi, Shantaram, Fatehlal and Damle were the ones I looked forward to seeing. I had yet to discover film-makers from other parts of the world.

Soon after I entered college I had my very first exposure to films from Europe, particularly Italy. Bicycle Thieves, Shoeshine, Miracle in Milan and Bitter Rice were among them. These had come as part of the First International Film Festival held in India and had presumably found Indian distributors. Some Soviet films came in at the time and I saw Mark Donskoi’s films based on Maxim Gorky’s novels apart from Battleship Potemkin and the first part of Ivan the Terrible. I found the film experience offered by these films far greater than most of the films I had seen before this. Soon enough, an Indian film caught my eye: Bimal Roy’s Do Bigha Zameen.

Not long afterwards on a trip to Kolkata, an uncle who lived there strongly recommended that I see a Bengali film made by a first-time film-maker. I saw the film in a south Kolkata cinema where it was playing. It was an afternoon show and the film was Pather Panchali. The experience was indescribable. As the expression goes, ‘it simply blew my mind’. When the show ended I rushed back to the box office and bought a ticket for the next show and went back yet again for the show after that. I saw the film several times over in the next couple of days before I returned home to Hyderabad. Here was a film, the like of which I had never seen before. And here was a film-maker who had broken free of the conventions of both Hollywood and Indian cinema.

Satyajit Ray had shattered the mould that had bound film- makers in India to a form of film-making that had remained unchanged since the introduction of sound. By a strange coincidence, this was also a time of revolutions in the cinemas of Europe: Italian Neo-realism, French Nouvelle Vague, the Free Cinema of Britain and the post-war films from northern, central and eastern Europe. All these had taken cinema to an exciting new phase. Far more significant to me than any of these developments was this single film by a first-time Indian film-maker in a film language and idiom that was both modern and entirely his own. The locations and the people in the film were believable and culture specific. It was beyond anything that I had imagined films of being capable of achieving; a true watershed in Indian cinema.

Satyajit Ray had arrived. He was a game changer in what until then was bound largely by conventions that had evolved entirely on the basis of commercial valuation of films by the cinema industry relying on narrative styles taken directly from the urban theatre that preceded it. Soon after came his younger contemporaries, Ritwik Ghatak and Mrinal Sen, who created their own individual styles in cinema, making Bengal once again a trendsetter, this time in cinema. For someone like me, who had film-making ambitions, Pather Panchali opened up a world of possibilities, helping me to break free from the web of film influences in which I was held. It compelled me to rethink fundamentally many of my views on how to create film narratives.

If there is a single contribution of Satyajit Ray to the world of Indian cinema it would be the path he created for Indian cinema to break free from being self-referential and imitative of subjects largely lifted from Hollywood films, in favour of a standardized urban view of the world that was largely the creation of nineteenth-century urban theatre.

Satyajit Ray set a very high benchmark for himself and eventually left behind an enviable oeuvre of films. The influence of Satyajit Ray on the many cinemas of India has been immense but rarely acknowledged. There are many areas of film-making where his influence has been felt in greater or lesser degree whether in acting styles, photography, production design, the use of sound and even in the creation of music scores which were rarely thematic before his time.

Equally, Ray was as creative and articulate in his writing as he was in his film-making. He is recognized as one of the best Indian writers of children’s stories. He also wrote quite extensively on cinema.

The essays in the present collection have been chosen and compiled by his son Sandip Ray, in association with others including one of his favourite actors, Dhritiman Chaterji, with obvious care to see that his views come across with clarity and precision. Starting with an early essay that predates his film-making (1949) all the way to the last part of his career, Ray displays a remarkably consistent view of the cinema he favoured. His reflections and thoughts give us a wonderful insight into the nature of his aesthetics, the extraordinary ability he had of absorbing and internalizing folk and classical traditions both of the West and East to find a contemporary and modern voice.

The essays here show him to be equally concerned with both the craft and art of film-making. He was neither overtly ideological nor given much to theorizing. Some views expressed in his earliest essays are probably dated now. And his view of Popular Indian Cinema for which he had little time could also be considered somewhat elitist. If he had been more patient with popular cinema, he probably would have found some significant reasons why it held the largest number of people in our country in thrall. The longest essay in this collection, ‘Under Western Eyes’, which is also the most rewarding, could well be his film testament.

The present collection of essays in Deep Focus serves as an excellent introduction to Satyajit Ray’s thoughts on cinema. It also opens yet another window to a deeper appreciation of his films. This is indeed a valuable addition to the not too many worthwhile books on Indian cinema. The Man That Corrupted Hadleyburg by Mark Twain