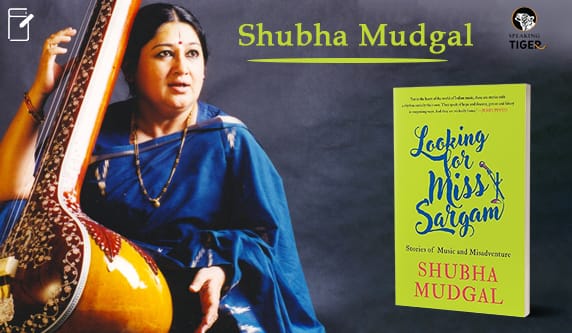 Shubha Mudgal has received many prestigious awards and titles, including the Padma Shri for her accomplishments in Hindustani classical singing. Looking for Miss Sargam: Stories of Music and Misadventure is her debut book.

The book is a collection of seven stories set in contemporary times against the backdrop of Indian classical music. In her own words, Mudgal thought out loud, “humour camouflages the inevitable sadness that often casts a shadow over the lives of artists.”

Reproducing here an excerpt from the book:

And finally it was here, her big chance. She was in Philadelphia, USA, in the sprawling home of the Mohite couple and their eight-year-old daughter Sulabha. The Mohites were crazy about Hindustani classical music and frequently offered to host visiting Indian artistes, especially if they came from their native Maharashtra. When they heard that Asavari would be touring America, they immediately contacted fellow Maharashtrian and President of the Indian Music Society of Philadelphia (IMSP), Shrirang Ambekar, and offered to host Asavari for the length of her stay in the city. Ambekar accepted their offer eagerly because it meant that the organization could save a little money, and also because Minal and Manjul Mohite were reputed to be very hospitable. He knew they could be relied upon to take care of Asavari and do everything possible to make her stay comfortable. Frankly, he was hugely relieved as well. Visiting Indian musicians could be quite a pain in the neck, often demanding constant attention and hand-holding. It would be a huge responsibility off his hands to have the Mohites take care of the Apte lady.

So here she was with the Mohites, seated on the rug in their living room, with their daughter Sulabha singing Raag Bhupali to her. The little girl was tuneful and had been taught well by her mother, but as could be expected of any Indian child born and brought up in the United States, her American accent often stood out rather strongly in her Bhupali. ‘Itno joban purrr maan na curriye’ she sang earnestly, accompanied by a tanpura and tabla generated from an app on her Mum’s phone.

Sulabha was singing sargams now, and every time she sang Pancham or Pa, she pronounced it as Pha—Ga Pha Pha, Ga Pha Pha, Ga Pha Da Pha Ga Rrrrray Sa. Dhaivat became Da instead of Dha and soon Asavari felt an almost irrepressible urge to giggle. But she willed herself to nod appreciatively, offering the little singer an occasional encouraging ‘waah’. The little girl continued for another ten minutes, singing each line and every variation twice. Jet-lagged, Asavari came close to dozing off in between, and struggled to stifle persistent yawns but finally, Sulabha ended with a tihai. As she finished, she looked expectantly at her mother, who in turn looked hopefully at Asavari for encouragement. Asavari applauded and praised the child’s singing, saying, ‘Chhaan! Khupach chhaan. (Really very good.)’

‘Honestly, tai? Please be frank, do you think she shows any promise?’ Minal Mohite asked.

‘Of course! Means…she is very, very promising and talented,’ replied Asavari  in  a  pronounced  Marathi accent, ‘and she will improve as she learns and does riyaaz. Definitely, she will improve.’

Mother and daughter exchanged happy smiles which Mum followed up with a request. ‘Do you think  you might teach her something? A little bandish? Or a bhajan? Or whatever you think appropriate? It will be such an honour for her, she will remember it all her life.’

‘Maybe tomorrow? Right now I am still a little tired, you know?’ said Asavari rather hesitantly. ‘Maybe jate-lag or something.’

‘No, no problem,’ said Minal, making no effort to hide her disappointment. Asavari felt a twinge of guilt and wondered if she should have held herself together for a little longer to teach little Sulabha a small composition, but the matter was decided in a trice by the little girl herself.

‘Mom,’ she chirped excitedly,‘I’ve been good, haven’t I? Now can I go watch TV? Pleeeeze?’ Delighted at receiving permission from her mother, she skipped and hopped up the stairs with Minal warning her that she would have to be ready to go to bed in half an hour.

Asavari wished her hostess good night and made her way to the basement where a mattress and bedding had been laid out for her on the carpeted floor. She would have preferred a bed, she would have preferred a room with a view, a window, but the Mohites had been so polite that she felt she shouldn’t complain. Perhaps they really had no bed to spare; life in the West, she had heard, was expensive business. Or maybe they had heard that she, Asavari, was a simple person who lived frugally, and had assumed that she preferred to sleep on the floor. Well, she would let them think that; a reputation for austerity was an asset in her chosen field.

But now, as she lay down, she realized that the mattress was horribly lumpy. It would have been very uncomfortable and kept her awake all night in usual circumstances. But she was so tired that she drifted into a deep sleep almost the moment her head hit the pillow.

She woke up the next morning a little disoriented. It took a while for it to register that she was not in her flat in Pune but in the basement of a house in America. Now she heard the great Marathi singer Sudhir Phadke’s beautiful voice wafting from the room above, singing a popular song from his ‘Geet Ramayan’: ‘Swaye Shri Ram Prabhu aikati, Kush-Lav Ramayan gaati.’ As she lay in bed, she started singing along with the track to test her voice, relieved at hearing something so familiar and well-loved. Her voice sounded a little hoarse and she cleared her throat a couple of times, then she got up, folded the bedding neatly and prepared to dress and get ready.

The Mohite family was up and about when she walked in on them in the large kitchen and dining area. Minal was bustling about, finishing chores as the family listened to music and had breakfast. They greeted her warmly and Minal announced that she and her husband had taken leave from work to spend time with her and perhaps take her into the city to shop or meet people she might know. Asavari turned down the idea, saying,‘Oh no no no, please don’t bother. I’m not at all interested in shopping, and I don’t know anyone here. As you know, this is my first trip to USA, or shall I say first foreign trip only, and I have no friends here whom I can visit.’

The Mohite couple were slightly irritated by her response but made a quick  recovery. ‘Okay, but what about some sightseeing? There are some lovely walking tours and food tours that you might enjoy. Or museums? No?’ asked Minal cheerfully.

There was a brief spark of interest in Asavari’s eyes at this, but then she said, hesitantly, ‘They must be ticketed, no?’

‘Yes, I think the tickets are around thirty to forty dollars.’

Behind her, Manjul rolled his eyes. Minal shot him a stare and said, ‘Yes, tai, per person.’

‘Forty dollars must be about 2500 rupees, no? Nako re baba. Too expensive. I have come here for music and let me do my music properly and go back to where I belong.