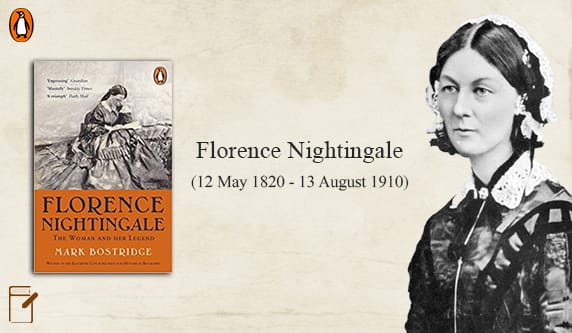 Florence Nightingale: The Woman and Her Legend

Florence Nightingale is the beacon of selfless service in the world. Her birthday is celebrated as International Nurses Day.

Florence Nightingale as the Lady with the Lamp, ministering to the wounded and dying of the Crimean War, offers an enduring image of sentimental appeal and one that is permanently lodged in our consciousness. But the immense scale of her achievements over the course of her 90 years is infinitely more troubling – and inspiring – than this mythical simplification.

From her tireless campaigning and staggering intellectual abilities to her tortured relationship with her sister and her distressing medical condition, this vivid and immensely readable biography draws on a wealth of unpublished material and previously unseen family papers, disentangling the myth from the reality and reinvigorating with new life one of the most iconic figures in modern British history.

Nurse: A person strong enough to tolerate anything & soft enough to understand anyone.

“Mark Bostridge notes in the final chapter of his masterly new biography of Florence Nightingale, one of the deepest ironies of Nightingale’s life is the way in which the uncritical veneration she enjoyed (or suffered) towards the end of her life—expressed in a landslide of material culture, from prints, statuettes and “Nightingale cradles” to music-hall songs and the imposing statue erected in London in 1915—proved central in creating the apolitical, religiose “straw woman” so easily torn apart by Strachey and his successors,” says Richard Barnett in his seething critique of the saintly image of Florence.

A seasoned biographer, Mark Bostridge has previously written the life histories of personalities like Peter Ackroyd and A N Wilson. But when he first signed up with the publisher to write Nightingale’s story, he never suspected what a huge task it was going to be. “It’s a real lesson that you should look into the practical problems. No sooner had I signed the contract, the British Library, which has 200 volumes of letters about Florence Nightingale’s public life, immediately closed” [in preparation for its move to St Pancras].

The books in the revelation of Nightingale’s astounding intellectual capabilities. “When I thought about doing the book, ages ago, I didn’t realise she was this great intellect,” Bostridge explains, “because like everybody else I had been brought up on the sentimental legend which thinks of her as a ministering angel and a nurse, and of course she was never a nurse, except in a very limited sense. She had a brief period in Germany before the Crimean War doing basic nursing training, and when she got to the Crimean War she did hardly any nursing at all, and never did any nursing subsequently. So to think of her as a nurse is such a ridiculous thing. What she was is a great nursing theoretician.”

These findings put a fresh light on the figure of Nightingale as the Lady with Lamp and provide insights into her other and more real strengths.

Among his other findings are: she wasn’t a malingerer or a hypochondriac but suffered from the excruciatingly painful disease brucellosis, and she didn’t take bromide to dampen down a ferocious sexual appetite but to ease the symptoms of spondylitis, which, says Bostridge, “is what kept her bedridden during the 1860s. Somebody once said that posterity has done Florence Nightingale a great disservice by saying she wasn’t suffering from organic disease. She was. I hope this book nails that myth once and for all.”

Bostridge is an empathetic writer and writes about his female subjects with deep care. His sensitive pen tries to disrobe the very much human face of Nightingale of her mythical veil. This sympathy dates back a long way, to a musical and literary upbringing he shared with his younger brother, the renowned tenor Ian Bostridge.

“In my childhood, I was always either singing or writing,” he says. “I was one of those children who just wrote all the time, and when I was 11 I wrote my first biography, of Anne Boleyn because there wasn’t a modern biography of her – you had to go back to 1899.”

As we celebrate yet another birth anniversary of much venerated Florence Nightingale and in consequence the International Nurses Day, there seems to be no sign yet of Florence Nightingale lying down and becoming a dusty old figure from history. The COVID-19 pandemic has brought the importance of selfless service to the fore yet again, and rightly so.

There will never be an uncontested figure ever in the annals of history. The meticulous details of Florence Nightingale’s life make for an interesting and insightful read but the author of this review still maintains that what matters the most is what her life came to symbolise.

The world will continue to celebrate Florence Nightingale’s life, and sing praises for those who dedicate their lives in servitude to the ones who need care and love.