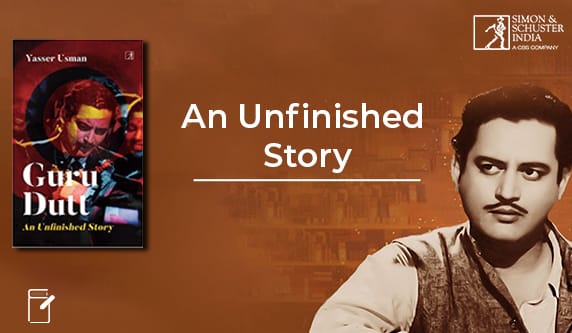 Written in the not-so-typical Yasser Usman style, Guru Dutt: An Unfinished Story is one of the most sure-footed accounts of the auteur’s life.

Imagine a filmmaker obsessed with self-expression when the entire country was trying to find its identity. Films were in safe hands those days with the studio system. Hindi Cinema, or Urdu Cinema as it was the prevalent language back then, flourished with patriotic fervor and equally sound techniques. From Bengal to Lahore to Mumbai, Hindustani language cinema was spread across undivided India. But as the nation attained the much-awaited freedom, Film Industry got cut in half, which ultimately saw the spectacular rise of Mumbai as the film city of India.

The Building of a Dream

A young Guru Dutt too moved to Bombay and started on a journey which was to attain mythological stature in the coming decades. The intrigue around Guru Dutt’s films and life still continues to mystify film lovers all over the world.

The book, Guru Dutt: An Unfinished Story by the celebrated Cinema Writer, Yasser Usman is yet another attempt to demystify the strange life of Guru Dutt. It opens with a chilling prologue that sets the stage for a telling that draws a reader in irrespective of his or her sincerity.

The book is divided into two narrative streams, ‘The Building Of a Dream’ and ‘Destruction Of a Dream’ which trace Guru Dutt’s life from the beginning and the middle. Although an innovative approach, this style of storytelling seems out of place from Yasser Usman’s writing style and feels to be hampering with the pace of an otherwise brilliant book.

But then again, the ingrained duality of Guru Dutt’s life justifies the writing style.

They say that he who understands the duality of life becomes the life itself. Guru was one such sensitive soul that got hold of the essence of life pretty early on but never found the courage to accept it. He tried to make sense of it all, knowing fully well that it was never to be found.

I used to get impressed by simple things. I saw how complex life is, and how simple too.

It’s well documented how a distraught Guru Dutt found solace in the company of his camera and alcohol. His earlier dance training under the tutelage of the great Uday Shankar shaped his artistic acumen and gave his life a direction. But the duality of life took complete hold of his psyche and kept on manifesting itself. As Abrar Alvi once commented on Guru Dutt’s worrying and self-destructive trait of dropping projects mid-way:

Destruction Of a Dream

The most dramatic part of Guru Dutt’s life brought out the most destructive aspects of his personality to the fore. Although well documented and well talked about, this phase of Guru Dutt’s life is much fabled and has been subjected to unjust gossip. Ironically, the fog that surrounded Guru Dutt’s mind during this phase has come to symbolize his entire life.

The biographer seems to have done a good job in clearing the picture as much as possible but without the consultation of Waheeda Rehman and the lack of information on Geeta Dutt’s part leaves an unwanted void behind.

Why Read the Book?

If not for the love of Guru Dutt and his timeless classics like Pyaasa (1957), Kagaz Ke Phool (1959), the book should be read for Lalitha Lajmi, the sister of Guru Dutt.

Earlier works on Guru Dutt are based on the conversations with his colleagues and other sources that add a little authenticity to the material but here the biographer had the privilege of speaking with Lalitha Lajmi who adds gravitas to the book. Moreover, siblings are the best source of information as their versions are neither colored by the romanticism of those of intimate partners nor have the disadvantage of being a complete outsider.

Yasser Usman took the pains of documenting a life so intricate that, you find him repeating some points over and over again to make sense of them in different contexts. Like how well-versed Guru Dutt was in shooting songs and how fond he was of his alcohol with sleeping pills.

One feels that the biographer ultimately wanted to paint Guru Dutt’s loneliness in its stark colors and richness. And in doing so, he hammers some points over and over again. But instead of hitting the mark, he slides just a bit off-target.

But that’s no fault of the biographer, for he named the book, quite aptly, ‘an unfinished story’. If you are a book lover, a cinema lover, or a good person in general, you should pick up the book, for the biographer is as sincere about his work as was his subject in this book.