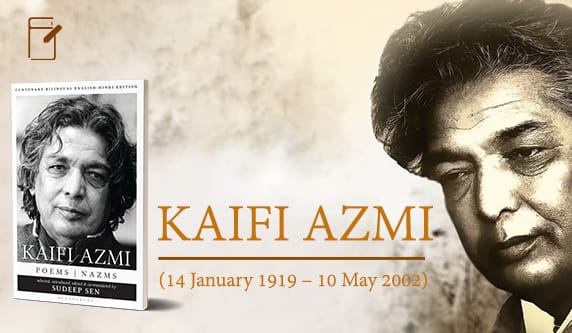 Kaifi Azmi born Athar Husain Rizvi on 14 January 1919 was an Urdu poet of great prominence. He is remembered for his immense contribution to Urdu through the medium of cinema.

As we celebrate the birth anniversary of one of the most influential faces of Urdu poetry of the 20th century, we take a relook at Sudip Sen’s eminent work which came out on his birth centenary in 2019.

The journey of the sensitive poet was mapped quite sensitively by Sudip in his translation of Kaifi Azmi’s works. The book, Kaifi Azmi: Poems | Nazms New & Selected Translations is a scholarly work that stands firm on both the content and the form level. His book is an astutely edited as well as an engaging read that presents a wonderfully translated anthology of Kaifi Azmi’s poems.

Here we reproduce an excerpt from the book:

The 100th birth anniversary of Kaifi Azmi’s fell on 14 January 2019. In the early part of the previous year, as winter was waning, I had a chance meeting with Shabana and [her husband] Javed Akhtar at a cultural event at the beautifully restored Bikaner House in Lutyens’s Delhi. Shabana shared that as part of the centenary, there were plans for year-long celebrations. It was then that the idea of this particular volume Kaifi Azmi: Poems | Nazms (Bloomsbury) took root.

After the meeting… I revisited the Azmi section in my own library. I leafed through his collection of published poems. I re-read the available translations in English. I read anecdotal accounts on his life by his family and friends — and as I read more and more, a book took shape…

Kaifi Azmi, whose real name was Syed Athar Hussain Rizvi, was born on January 14, 1919, in a zamindari family in the village of Mijwan in Uttar Pradesh’s Azamgarh. He wrote his first ghazal — ‘Itna To Zindagi Mein Kisi Ki Khalal Pade’ — at the age of 11. What marks this debut piece of writing is that it was later sung by the well-known singer, the young Begum Akhtar.

Azmi abandoned his Persian and Urdu studies during the Quit India agitations in 1942 — and, shortly thereafter, became a member of the Communist Party of India. Later, he went to Bombay and joined Urdu poet and lyricist Ali Sardar Jafri in writing for the party’s paper, Qaumi Jung. When he married Shaukat Kaifi, he was a ‘full-time’ card-carrying member of the party, living in a commune-like arrangement in Mumbai. A member of the Progressive Writers’ Movement, Azmi worked closely with the labour union movement and his concern for the less privileged has found ample voice in his poetry…

In February 1973, when Azmi was in his mid-50s, he suffered a paralytic stroke, which left his left hand and leg incapacitated for life. Even as he struggled with the disability that was imposed on him, he continued to write. He also chose, at this stage, to direct his energies to the uplift of Mijwan, the village that was his birthplace. This stayed his focus till the time he passed away, aged 84, on May 10, 2002…

His legacy, even a 100 years after his birth, is aptly illustrated in the following extract from his poem ‘Doosra Toofan’ (‘Second Storm’):

I first met Shabana Azmi about two decades ago in Bangladesh… I recall telling her that I greatly admired Kaifi Azmi’s poetry, and that I had an out-of-print copy of Pritish Nandy’s translations of The Poetry of Kaifi Azmi. This sharply piqued her interest — she said she herself did not have a copy of it anymore and asked if I could pass it on to her. Shuffling hesitantly, I replied that I would happily give her photocopies of the book, but the original copy was one of my prized possessions. The next day, I sent two sets of photocopies of that book to the hotel she was staying in, with a note requesting if she could mail one of them back with Azmi’s autograph.

Some years passed and then, in 2001, I received a package from her containing the then newly published book of translations by Pavan Varma, Kaifi Azmi: Selected Poems (Penguin). To my pleasant surprise, it also contained, autographed by Azmi dated 26 May 2001, one of those photocopies of the Nandy translation…

On the fly-leaf of the book was Azmi’s autograph and a personal note in blue-black: “Sudeep Sen ke liye, jo khud ek honhar shayar hain [For Sudeep Sen, who is himself an able poet]”.

As a young poet then, and an admirer, you can imagine how thrilled I was (and remain so until this day). My only regret is that I never got to meet him in person as he passed away not too long after that.

Like the book, represents the heart as well as the soul of Kaifi Azmi’s work and his persona itself we leave you with one of his poems.

A Poem from the book, translated by Sudeep Sen

One Moment
What we call life, is just a few moments
and within that one moment
when a pair of expressive eyes
look up from a teacup
and drown in the heart
drowning, say
today, I will keep mine.

Let us just sit
hand in hand
with our mutual gift of grief,
with our shared heat of emotions
Who knows in this moment
on some distant mountain
the snow might start to melt. 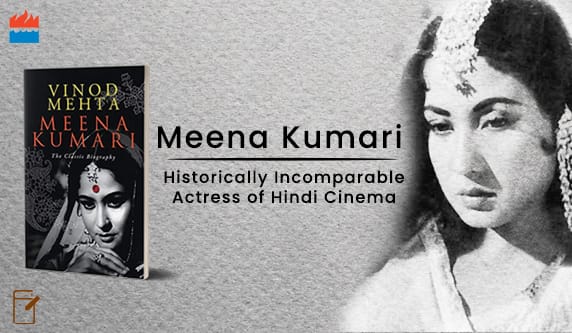