A celebrated Hindi poet, music and cinema scholar Yatindra Mishra has four collections of Hindi poetry, several books on Indian classical music and cinema and translations.
His works have been widely acclaimed in India & foreign lands and have been felicitated with many awards & fellowships. His book Lata: Sur-Gatha won six awards in 2017, including the prestigious 64th National Film Award for Best Writing on Cinema (Swarna Kamal) and the MAMI Mumbai Film Festival Award for Best Writing on Cinema, 2016-17.

His latest book, Akhtari: Soz Aur Saaz Ka Afsana, is based on the life, times and music of Akhtari Bai Faizabadi Aka Begum Akhtar. He is currently working on a book on eminent lyricist, poet and filmmaker Gulzar Saheb.
In 1999 he founded the Vimla Devi Foundation to promote literature and the arts, and since 2006 he has been organizing an annual festival of performing arts called ‘Ishwar Allah Tero Naam,’ aimed at highlighting India’s Ganga-Jamuni... 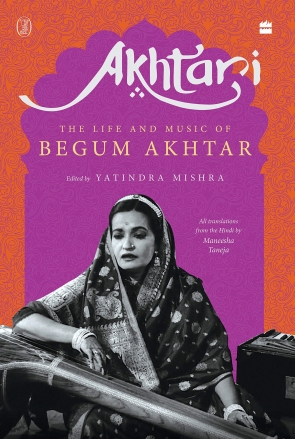 Akhtari: The Life and Music of Begum Akhtar

Akhtaribai Faizabadi, or Begum Akhtar as she was better known, was a legend even during her own lifetime, and one of the last of the great singers from the tawaif community. Akhtari documents her eventful life and her music through essays and reminiscences by some of her closest friends and associates, and by people who knew her work deeply -- including the likes of Bismillah Khan, Lata Mangeshkar, Shubha Mudgal, etc. The volume also includes long interviews with Begum Akhtar herself as well as some of her disciples. A bestseller in the original Hindi -- and now available in English -- this is a volume to treasure for all of Begum Akhtar's fans and lovers of music.

Get the popular blogs, click on the link to see all blogs.

My all gallery collection

My all Video collection

Share your words with your favorite author, and let them know your perspective and thougts about their writing!