Amit Gupta is a bilingual writer and writes in Hindi and English. He started his writing career writing articles for magazines. His first book ‘Raat Ke Us Paar’ was published in 2018; which received a Grant from Hindi Academy - New Delhi, India for their Annual New Writers Grant Program. His second book ‘Uncollected Nothingness’ is a collection of poems that delve into ‘Being and Nothingness’. He also writes short stories and novels in both languages. Apart from writing poems, stories and novels, he also writes Thumri (a genre of Hindustani classical music); some of which have been published in Sangeet Natak Akademi’s quarterly magazine - Sangana. Being an avid reader and a film-enthusiast he spends a considerable amount of his day reading and watching critically acclaimed cinema from around the globe. His next book is a Hindi novel which is soon to be released. 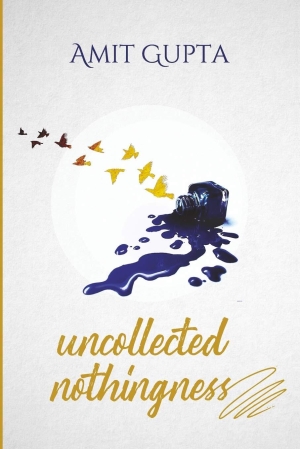 “Life is nothing but an undated sheet bearing several moments of ‘Uncollected Nothingness’, and by the time you understand its true meaning, the day is gone. Out of nowhere, twilight makes way for the night to fall upon you; and you stay awake to collect the different forms of nothingness, but you only end up getting moon-burns.” If there was an ideal way to collect nothingness, then it would be to write anything and everything that happens with and around you during each moment of the day. Art is never perfect in its totality, but if it were to be, one must collect the nuances of each moment the same day. But how can I do it if am not standing apart from that moment, which sometimes demands a day, while sometimes weeks and months. I try that the chain of events doesn’t slip from my fingers, but if they still slip through my palms, those events would be nothing else but, dust in the air, and I will end up exaggerating the facts. I will brutally murder the essence of the poem – its time, space and environment, and of course its truth. I am well aware that it’s imperative to pay attention to each detail, to each nuance, and to each silly thing that happens around me like an uncut film, but I must classify them between important and unimportant events. But I mustn’t stop seeking. And I mustn’t exaggerate either. A lot of times everything disgusts me – the people around me; both the ones I know and those who I don’t. In fact, the world, the law, the borders, religion, love and above all the way the universe functions, disgusts me too – but I don’t like to put everything on paper; some things I ignore with a pinch of shame, while some I don’t write thinking, why must I care? I have often noticed that I whenever I try to write something forcefully, the words start to curse me. Often when an unsettling event wakes up from nowhere; mostly during those lonely nights of my bemired existence, I first try to settle down my unnerving nerves, and then gather the courage to put the events down on paper; in order to seal the event with a date and time, and of course a place. During such times the words often play the cheating game with me; they very well know they possess the power to bring me out of my misery, but no, instead of helping me, they play every trick in the book to keep me caged in contemplation. I classify such events as the darkest moments of my life, and at the same time the most defining ones of my existence. I would like to define these dark moments as the moments of absolute nothingness, but without exaggerating. Exaggerating the events that occur around you is creativity’s biggest enemy. For I mustn’t dare to play with the facets of truth and lure it with imagination. One mustn’t be on the lookout to create events; either they occur, or they don’t. … And so, I must live with this void and let them be uncollected, if they please to be thus.

Share your words with your favorite author, and let them know your perspective and thougts about their writing!